Sensible Minnesota will feature a regular segment highlighting cannabis consumers across the state until Minnesota adopts sensible policies for the adult and medical use of cannabis. If you would like to be featured in the segment and share your experiences, please contact [email protected].

My son Adam was such a good baby; he was always smiling, happy, and content. As an adolescent, he was shy and held back while in a crowd, but he had the funniest sense of humor.  Adam loved hockey, golf, and fishing.

By the time Adam was 14 or 15, he started having anxiety attacks and was treated for depression. He began to experiment with drinking and we knew at once it was something Adam should never do.  We immediately got him into outpatient rehab.

That was in 2000, the year before my life would forever change along with Adam’s. I took a bad fall off my front step in January 2001 that has left me, to this day, in horrific nerve pain in the perineum, buttock, and thighs.

By June of that year, I had a kitchen cupboard full of everything from Percocet, OxyContin, Fentanyl patches, Methadone, and everything in between. I was diagnosed at Mayo Clinic in 2001 as having pudendal nerve entrapment, a condition where the pudendal nerve, which is in the pelvis, is entrapped or compressed. Treatment was three CT-guided injections, and flying to France to have a surgery that was not available in the states at the time. I was told the right side of my body was damaged and that I could always have to live in pain.

I was losing myself and we again were having problems with Adam. I didn’t know kids were stealing prescription medications from parents. It just never occurred to me. It wasn’t until I was enrolled in a pain clinic that I was told to keep them locked up.

But it was too late; Adam was now a heroin addict.

We tried many things: kicking him out, enabling him, letting him stay in our home, bailing him out or paying fines. We tried tough love and interventions. At times, we worked harder than Adam, but it wasn’t that he didn’t want to be clean. He would cry, we would cry together many times.

The summer before he died, he had at least three overdoses of which we were aware. He had multiple seizures the last five years of his life. He had contracted Hepatitis C and could not hold down a job. He had three felony charges from stealing, two of which we pressed in hopes of him getting the help he needed for the length of time he needed.

He spent 32 days in jail for a probation violation from September to October of 2014.

He had a major seizure and was put in the hospital handcuffed to the bed for three days. I picked him on October 21, 2014, from jail and we drove to the Methadone clinic then came back home. I was glad to see him. He looked good. His beautiful blue eyes were clear and not glassy, nor were his eyes dilated.

Adam went downstairs that day and I never saw him alive again.

At 11:00 a.m. on October 22, 2014, his friend informed us that Adam was not breathing properly. She had called 911. They worked on Adam for a long time; I still have the image of him lying on the floor of the family room with firefighters and emergency medical technicians surrounding him. The cause of death was a Methadone overdose. 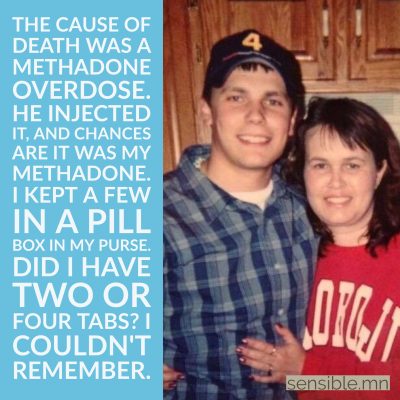 He injected it, and chances are it was my Methadone. I kept a few in a pill box in my purse. Did I have two or four tabs? I couldn’t remember.

We need more resources to address the opioid/heroin crisis in this country. Medical cannabis is one of the tools, a very important tool that could help lower the number of deaths.

Minnesota’s medical cannabis program is failing in that area.

People such as myself are still forced to take deadly, highly-addictive prescription medications because of the cost of our state’s medical cannabis.

Looking at the bottle of pills that got my son hooked in the first place, and chances are killed him, is an extremely torturous place to live in day in and day out.

Cannabis is safe, cannabis is not addictive, and no one has ever died from a cannabis overdose. Again, Minnesota’s program is flawed.

It does not allow for the patient to pick the strain that is the right fit for their affliction. We have an opioid epidemic in this state, and we also have a tool: medical cannabis. Unfortunately, access is only for those who can afford $200-$300 a month to replace medications that literally cost me $25 a month.

Which one would you chose? Would you risk buying it illegally if you knew without hesitation it could end your use of deadly, harmful opioids?

At 53 years old, I should not be forced onto the black market to end my 16 year use of deadly opioids.

But that’s exactly what Minnesota’s medical cannabis program is doing. I’m a grieving mother, a chronic pain patient, and I’m in support of full legalization of cannabis.

Joan is speaking at the State Capitol Rotunda on 4/20/2017. Join us for a rally supporting the end of cannabis prohibition.